In August, 2008, the Laurie Ann was trailered over 5 days to LeClaire, Iowa where it was launched in the Mississippi River.  Though we intended to go all the way to Chicago, once we made it to the Mississippi River, we stopped and launched.  We learned about locks, pools, wing dams and the guidebooks told us how to talk to the tow boat captains and the lock masters on the VHF radio.  We learned more about terms like the "one whistle," the "two whistle," "up bound" and "down bound."  In seven days, we were close to St. Louis when the last of Hurricane Ike came up the Mississippi River Valley.  Within hours the peaceful river was transformed into a swift torrent carrying debris and logs.  Near Alton, Illinois the Coast Guard closed the Mississippi to recreational vessels.  We could be stuck in the marina as the water level continued to rise.
We opted to get the truck and trailer and just as the ramp was being closed due to high water, we floated the tug onto its trailer in Alton.  Four hours later, we were 200 miles away and on the Tennessee River behind Kentucky Lake Dam.  The boats at the Alton Marina would remain stuck for three weeks while we continued southward.

Traveling on the Tennessee River 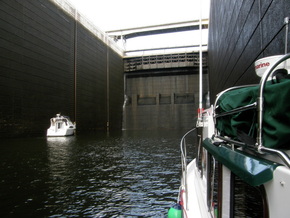 The only mechanical issue happened at Green Turtle Bay Marina at Kentucky Dam. The fresh water pump failed on the tug but the factory came through by overnight shipping one from Seattle and all at no cost.
As members of the AGLCA, the American Great Loop Cruisers Association, we flew a burgee and nearly every marina that we stopped in, other members would welcome us, share their friendship, their chart information on where to go and what to see, and we would have dinner together.  We continued southward and then eastward on the Tennessee, moving through one lock and dam, into another pool and to another lock and dam.  We spent a week at the AGLCA's fall rendezvous at Joe Wheeler State Park in Alabama and then continued eastward to Chattanooga. 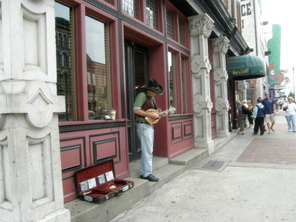 Chattanooga is very friendly for boaters with a wonderful marina setting in downtown, easy walking, and a bike path that follows the river's shore.  We took two folding bikes that stored nicely on the top of the tug and used them extensively.  The truck and trailer was moved several times during the river trip and we took a road trip to Nashville.  We toured the downtown and the country music hall of fame.  Enjoyed fabulous food and great music.  By night fall, we were back on the tug.

Down to Mobile Bay 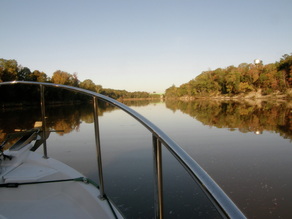 The Tennessee-Tombigbee Waterway was a huge public works project that was completed in the 1980's.  There are a dozen dams and six of them are transited in one day.  The region is quiet and remote.  Cellphone coverage is spotty or non-existent.  The people are friendly and gracious.  You have to anchor on this portion but we were accustomed to it.  Columbus, Demopolis, Bobby's Fish Camp are all stops along the way to refuel.  After the man-made portion of the waterway, the Tombigbee River is narrow and windy; a five mile trip can cover only a mile of straight distance.  The tow boats were more frequent and the captain's Cajon accent could be hard to understand until Laurie took the radio and they loved to talk to a woman!  Our journey ended at Fairhope, Alabama on the eastern shore of Mobile Bay.

A Helpful Link for information about doing the Great Loop

AGLCA is the prominent organization of "Loopers"