Boarded by the Coast Guard

If you have not been boarded by the Coast Guard, you probably will be if you are on the water long enough. My intention with this post is not to whine, snivel or complain; it is to share my experiences so hopefully your experience will be as pleasant as ours.

We had just launched the Laurie Ann at the boat ramp near Alki in West Seattle and were making the two mile crossing of Elliot Bay to meet Dave & Maureen Baker in their Ranger 29, Karma and Bob and Nita in their Ranger 29, Nellie Too at Bell Harbor Marina. It was boat show weekend. We first saw the Coast Guard's bright orange patrol craft as we entered the ferry traffic lane and its blue light was already on. We were going 7 MPH and the 20-something foot craft powered by twin outboards quickly closed the gap. We idled down and put the tug in neutral, came out to the tug's cockpit with that two arm, open gesture of "huh?" The boarding officer stood in his cockpit and asked if we had been boarded in the last two years. Our reply was no but we had been inspected by the Everett Police marine officers last summer.

The boarding officer politely instructed us to get out of the ferry lane and we would be boarded. When we cleared the traffic lane, the Coast Guard craft came alone side, no fenders necessary because their whole boat is one big fender, and two armed Coast Guard officers came aboard at the swim step and came into the cockpit. Their first question was a polite, "Do you have any firearms onboard?" Having retired from 32 years in policing, I knew the source of this question was about their safety and told them no. We have never carried firearms aboard. Why? Defending property with lethal force just does not much sense and the boat has plenty of accessible edged weapons in the galley that are more effective against an attacker.

I told the officer that I had a confession to make which caused him to pause and study me. "My flares expired in September and I am buying another set at the boat show." He relaxed and said that flares are not required at this location but is required outside of the metropolitan area. He said we could give the expired flares to the Coast Guard Auxiliary or mark them with "Training" and keep them aboard and that is what we will do.

Then, the officer asked to see the engine to make sure there were no sparks or unsafe conditions. One glimpse at the tug's purring diesel, made those concerns go away. Then, the boarding officer asked to see our identification and the boat's registration. We keep the boat's documents in the nice Ranger Tug bag that the factory gave us that has all of our owner's manuals. The lead officer said for us to proceed to the Bell Harbor Marina, to our slip where the inspection would continue. With the Coast Guard boat following, we idled toward our slip and as we passed Karma, David Baker said, "John, do you know you are being followed by the Coast Guard?" I said, "And I have two of them aboard right now." David made a hasty retreat inside his beautiful Karma.

The lead officer politely asked if the second officer could do the inspection because that officer was in training. We said sure and continued to tie up the tug and attach the shore power cord. They inspected the Y-valve position to ensure that it was in the holding tank position. Yes, on the R-25 it is accessed by opening the cockpit cabinet, opening the deck access lid, and doing an awful contortion to see it; the boarding officer did all of that. The valve was not secure with zip tie or cable tie and the officer offered one to use. Right then, I put on the zip tie.

They checked the horn, the fire extinguishers, the PFD's and the throwable cushion. We have kept our cushion in the starboard cockpit hatch but that was not acceptable. We need to move it so it is more easily accessible. They did a lot of data entry on a wireless hand-held device. They were very complimentary about the tug and its layout, taking in all the electronics and comforts. The whole inspection lasted 20 minutes and throughout, the officers were polite and professional.

They left and shortly afterwards and stopped another Ranger; an R-29, the Nellie Two

Mounting the throwable cushion in the cockpit 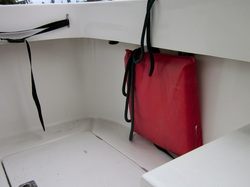 We wanted the cushion to meet the specifications of being accessible yet wanted it out of the way and off of the cockpit floor.  The fix was easy, put two snaps in the strap of the cushion and mount the other half of the snaps onto the cockpit's wall.  Turns out, it becomes an easy to place to store the stern line.